Hi, I recently bought a vintage Normark match rod from a car boot. It is in really good nick apart from the varnish is pealing off all along the blank. Which means that the line catches on the blank during casts. Can anyone recommend methods and materials for sanding down the old varnish and re-coating and sealing the blank? I saw this stuff on eBay, has anyone used it or similar? thanks.

Aye, that's the stuff to be using.

If you look on the web, there are probably demo's of how to go about it.

If I can find one, I'll post the details here.

Some good info there for the future

It's something I'm interested in as I am going to convert my old 3 piece 12ft carp rod into a 2 piece 8ft stalking/spinning rod.

I've already stripped all the rings off and cleaned up the blank. Well, the top 2 sections anyway. The 'old' butt section won't be reused. The only things I need to buy are a reel seat, duplon tubing for the grip and an end cap for the butt section. About a tenner.

The top two sections have a nice 'all through' arc to them which gave me the idea to use as a stalking rod. The original rod was 2.5lb test curve and I'm assuming that the 'new' rod will (in theory) be around that figure too.

If the rod is no good when I've done it, it won't be too much of a loss as I only paid £12.50 for the original rod anyway

Depends on the action of the old rod. If it was fast taper, then you might get much the same TC. If it was a slow taper, then you'll probably increase the TC as it stiffens. How much load and stress it can take though is another matter.

Andy Macfarlane wrote:Depends on the action of the old rod. If it was fast taper, then you might get much the same TC. If it was a slow taper, then you'll probably increase the TC as it stiffens. How much load and stress it can take though is another matter.

will the tc not get lower as the butt may have held a reasonable amount of the power?

intriuged as to how this goes

If it's a fast taper, the butt has little part in the action of the rod...right?..because the butt doesn't flex. It's just the top section.

If it's a slow taper, more of the rod, including part of the butt section flexes. If you chop part of the butt away, you have a shorter rod. Although it may have the same degree of curve, the fact that it is now shorter means it can't bend all the way round to 90 degrees.

Imagine a slow taper 12 foot rod locked at the butt. It needs all 12 feet to pull the tip round to 90 degrees...yes? Now shorten it. With the same weight applied, the tip can't possibly reach that far, so to achieve a 90 degree bend, you'd have to increase the amount of weight or the TC.

The rod has essentially become stiffer, like breaking a tip! but at the other end. The shorter it becomes, the stiffer it is. Like pole with sections removed.

Is that making sense?

I think I see where you're going with it Noodle. I think you'd have to dramatically shorten the butt end, leaving only a gooey end section for the TC to decrease but that would be a considerable cut and the rod would be severely compromised by that time anyway.

see now all that makes sense

a few broken rods face maybe have a play

I can't say I've ever noticed the butt section bend so I'm assuming it'll make very little or no difference to the TC. I could be wrong and the whole thing may be a waste of time and effort but as it isn't going to cost much and the original rod only cost me £12.50 I'm not bothered if it doesn't work. I only need to get a reel seat and duplon grip, I have whipping thread and varnish already.

And besides, where's the fun in not trying?

Obviously I'll get the rings on and give it a thorough test before finishing the blank and using it. I wouldn't be able to live with myself if I found out too late that it wasn't fish friendly and smashed on first contact with a decent size one.

BTW Andy, I can still (just) see where the original rings were so will re ring it on the same side so as to be sure about the spine.

Makes for good reading does that Andy. Thanks.

This isn't the first 'rod restoration' job of mine as such, I have rerung before but have only done one complete restoration job and that was about 25 (or more) years ago. I had an old boat rod that was given to me that was in a terrible state. It was very stiff, heavy and only really any good for the dustbin but I 'restored' it as such.

Off came the rings and I cleaned it up, revarnished it using a tin of yacht varnish of my old man's from the garage, then rerung it using the original (but cleaned up) rings. New rings would have been better really, and I shouldn't have varnished the handle but hey, I was so proud of my achievement.

I gave it to one of my uncles who said he could make use of it on his holidays. Sadly, I never knew what happened to it after that as he died not long after.

Anyway, the current job hasn't really had much progress apart from I have reattached the rings with tape to see what the curve will be like. I used the whole lot of the rings that were originally on the 3 sections to ring the remaining 2 sections so there are more rings than there originally were on the 2 sections so that the line will follow the blank's curve better. I hope you understand that bit!

I will thread some line through it when I get a chance and take a photograph to show you all. If all goes to plan it will have a nice 'through action' and I will get Gavin to fetch his scales round to measure the TC.

As it will be used as a stalking rod, I had the crazy idea of doing a British DPM camo paint job, but decided against that as I was rubbish at art at school and it will only add more time and money to the project. So, black or green but in a matt (or satin) colour it is then.

If it's a stalking rod, how about light grey?? It's going to seen from below and black ain't very camo.

Never did understand camo for fishing myself...

Here's the photo I promised. 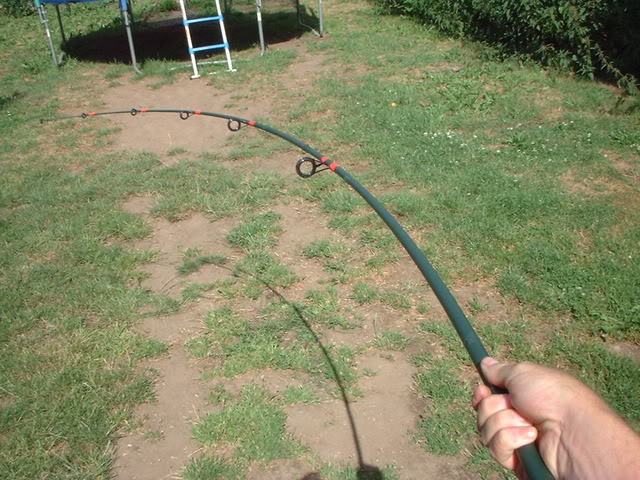 As you can see, it has quite a good bend to it. Just need to see Gavin now and measure it's TC with his scales.

Good point about the colour of the rod Andy, never thought about the silouette from the fish's perspective.

i would imagine that the silhouette created by the rod would be the same whatever colour the rod is.... i mean they all cast the same shadow

A silhouette and a shadow is 2 different things.

Sorry, but this project has now been scrapped due to cracking the blank where the 2 halves fit together.

I didn't put any whipping on the blank where the join is and decided to take another look at the curve on the blank. Decided to see if I could take the bend as far as I dared with inevitable results. Should never have tried it with no strengthening to the join

Ahhhhrrrr AAAAA lefty i'm gutted for you, Built a rod myself a few years ago and did a silly thing, I tried reeling up the line a breeze block, Thinking it would be like lifting a heavy fish from the sea, And hey presto, The Rod went of like a shot gun, I realy feel for you mate after you did all that work