In this follow up to my post on how to construct a trace for the tagging method, I will outline how to attach the bait to the hook.

For the original post on constructing the trace see here:
https://pikeangler.forumotion.com/pike-fishing-f1/single-hook-tagging-method-t816-15.htm

The thinking behind the tagging method is one of less chance of deep hooking and easier unhooking meaning less stress on the pike and therefore a quicker return to the water.

At all times be aware of where the needle point and your fingers are in relation to each other.

In this first picture you will see the items needed. They are a tagging gun (same as is used for attaching labels onto clothing etc) which can be found quite cheaply on places such as Ebay. Just search for 'tagging gun' or 'kimble gun'. Also you will need the tags and of course your chosen baitfish. 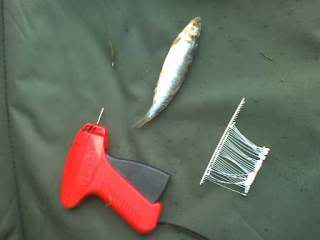 First of all put the needle of the (already 'loaded') gun through the loop on the hook. 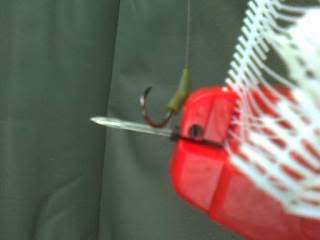 Then put the needle through the root of the tail on your baitfish. Try to pierce through the bone so as to get a good solid hold. If you don't hit the bone you may want to try again but if you are not casting too far then you should be ok through the flesh of the fish. 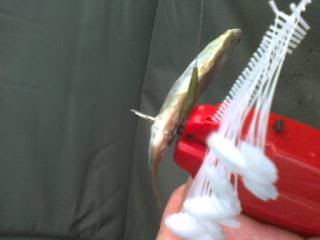 When you fire the gun it is sometimes advantageous to hold the fish in place as the tag can sometimes drag the fish off the needle and not be fully through, meaning you will either have to try pushing the tag through the resulting hole or redo the whole thing again.


When you are finished, this is what you end up with. 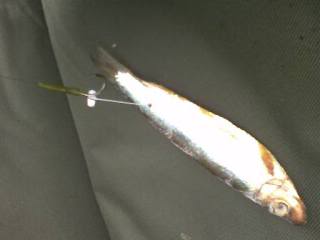 It has to be said that this is not a method I would use with large baits as you risk ripping the bait off during the cast purely because of it's weight and momentum catapulting it clear of the tag. I use it on small baits such as the sprat pictured or when using half baits such as half a herring or half a mackerel.

This is not a method that all pike anglers will like as it uses a single hook and is 'detached' from the bait meaning it is not an 'instant strike' method. It can be an 'instant strike' method if you use small tags (say 25mm) and the aforementioned small baits. That way (unless it is a small jack that has picked up the bait) you can be pretty confident in the hook being in the pike's mouth when a pick up occurs. Let's face it; a larger pike has just as much chance picking small baits up as a little jack pike. The big pike won't leave it in order to go looking for a bigger meal will it?

If the pike should happen to gorge the bait, then even if the bait is in the back of the mouth or beginning of the throat, because of the arrangement of the hook, it will more than likely still be in the pike's mouth. Therefore when you strike it is a safe bet that the hook should catch in the mouth.

As I've already outlined, this is not a method that all pike anglers will like or adopt, especially experienced anglers who have always used 2 treble hooks for their piking. All I can say is if the said anglers are happy with using that method and they are confident in their skills, then by all means carry on using it.

I think this is a great method but why go to the expence when you can get the same result with a piece of fuse wire wrapped just above the shrink tube and trimmed down nice and neat, also does the gun work with some type of heat process???

I suppose you could use other methods of attaching the bait but I should imagine wire would be too stiff.

The gun works by firing the plastic tags through the hollow needle. No heat involved. Exact same gun and tags as what is used to put labels onto clothing.

I think its a great idea and I'm sure it can be applied in other ways also, how much are the guns and tags?? I'v had a closer look at ur pics and they are the tags used to hold the tops of socks together arnt they, they'r very strong I'm always worried i'll damage the garment I'm removing them from, if tou could use something that wud work on the basis of a washer on the opposite side you push the needle through that would give it a much stronger hold especially on larger baits, maybe a bait flat but pierced centrally, great idea and lots of scope lefty

just use a deadbait tag mate to stop the plastic tag from pulling thru the deadbait.

sorry i didn't read it properly

cud u use this method on livies

they would turn into deaddies after being harpooned by that gun 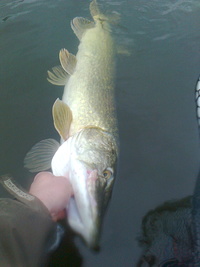 Other users of the tagging method do indeed use deadbait flags. I prefer not to on the basis that if you strike and the hook is not in a position to catch hold, then the bait should pull free and you get the tag back. That way mr/mrs pike doesn't have to try and digest some plastic.

I dont see why the method can't be used on lives. After all, it's only as if it has a hook in it. Preferably don't fire it through the bone though as the bait probably won't be able to swim correctly, if at all.