Went on a local canal on Sunday for a spot of breaming and (hopefully) one of the resident, but usually elusive, chub.

It was a slow day and at times downright boring. Except for trying to keep the umbrella where I'd actually wanted it.

After the obligatory small roach and perch, we hit into a shoal of small to medium bream and then all went quiet for about an hour and then we started to get some action again. I was set up with a 12ft float rod and alarm as it was useless trying to use a float or swing/quivertip because of the way the wind was howling.

Gavin and me started to get some odd bleeps and quick, short dropped runs when all of a sudden my alarm started screaming it's bloody head off and I momentarily sat there staring at the rod in disbelief as line poured from my Shimano baby baitrunner. When I finally jumped up and grabbed it, I could tell it was a good fish with the heavy knocks being transmitted through to my hands.

As it neared the surface twisting and turning trying to throw the hook, I honestly thought it was a carp as it dived back down to the depths. Carp have been seen on this stretch and one was seen (a week previous by myself) on the banks that was dead and would have weighed around 15lb or more.

My heart was pounding and I could hardly contain myself as I shouted Gav. "Get my landing net ready it's a big un". He ran over to my peg, tripping and stumbling in the process and almost going headlong into the nettles.

As it got nearer to the surface, we both saw the mahoosive gob surrounded by big white rubbery lips that unmistakably meant chub. I was wetting myself with excitement as Gav scooped it into the landing net.

As I was unhooking it he was getting his phone out to take a photo and when the obligatory shots were taken he ran to the car telling me to sit it in the edge and hold it there in the net while he went for the scales.

I was in awe! My second ever chub and it was an absolute beauty.

) the scales showed 2.5kg which equates to 5 and a half pounds. I know that is nowhere near the British record of 8lb 13oz, but by eck was I chuffed!

The successful tactics were double red maggot in conjunction with a cage feeder filled with said maggots then 'capped' at both ends with my homemade groundbait of liquidised bread, 2mm and 4mm pellets and chilli hemp.

I'm still waiting for Gav to send me the picture and as soon as I receive it I will be showing it on here.

Look forwaed to the pics

Sorry for the delay guys 'n' gals, finally got the pic sent to me from Gavin. 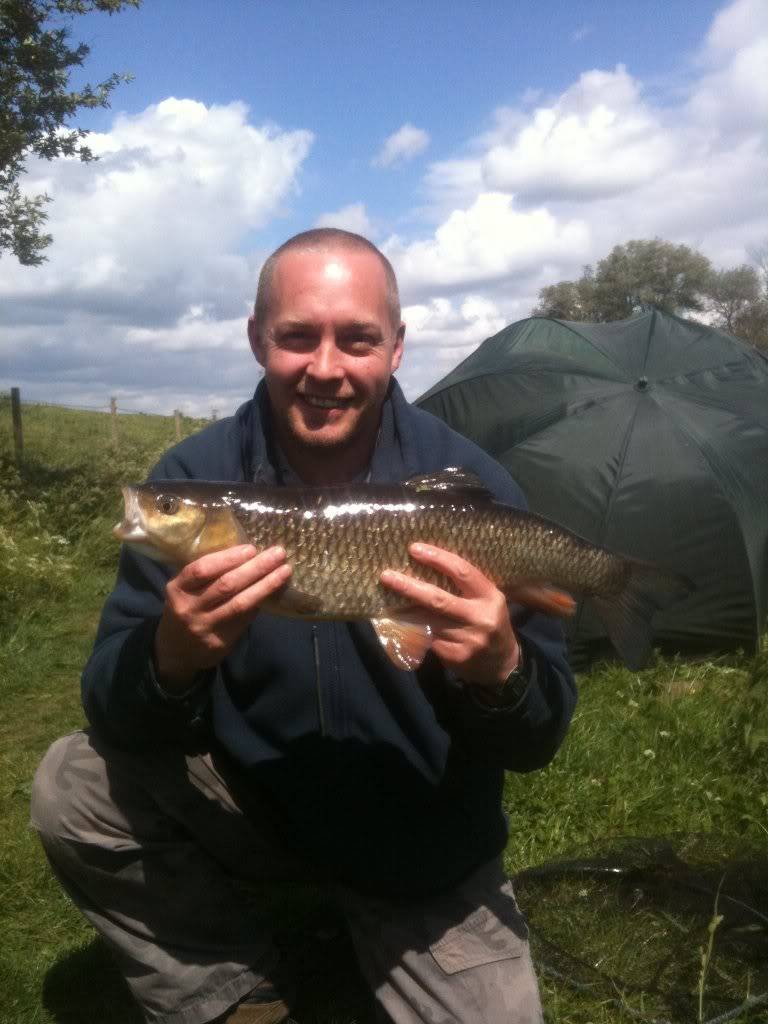 One for the gallery me thinks

Thanks for the congrats, lads.

Andy, that would be great to see in the gallery. Thanks mate.

Thanks very much Andy.

It is a cracking Chub Lefty mate

Thats a belter, Well done on your new PB Lefty,