I got me a new reel

I got me a new reel

I've been away for a while and if you can remember, I was enquiring about reels and Alex (aka Mr Makk) mentioned a Shimano Alivio 10000 XTA. I was wanting a reel to use for both carping (freespool mode) and piking ('normal' mode with open bail arm) but not wanting the usual baitrunner that is activated via a lever.

My reel at the time was a Wychwood Rogue Freespool and when using it for pike I was paranoid about catching the baitrunner lever and allowing any hooked pike to shoot off and possibly lose it. The Alivio seemed ideal as the baitrunner mechanism is built into the spool.

Well, it's took me a while but I managed to find one at a bargain price.

Fleabay had been scoured time and time again and I either missed out on the bidding or they wanted too much for what I wanted to pay. (Yeah, I'm a tight git

First impressions are good but won't be able to give a proper review until I've used it in anger. I'll keep you all posted.

Thought I'd add a picture of one for your perusal. 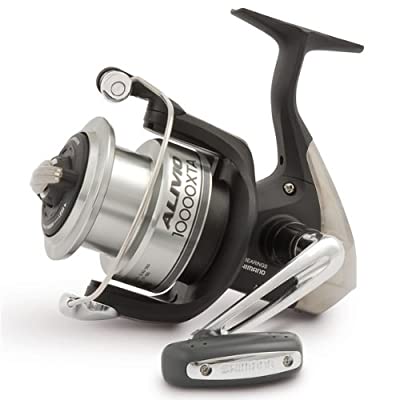 And at that price it's a steal.

hope you have some good fun with it russ,

I had one of the lads from work bring his ultegra's in to show me, that had the baitrunnerII spool on, funny little contraption..... but he tell me it's one brill little this on the big pits....

Good price for a solid quality. My daughter use Alivio reel as a starter spining combo.

How would you possibly be able to catch the free spool lever, its in the same place as my shimano's that ive had for 16 years, it seems impossible