I'm on the bank at the moment and Iv just had a pike swim to the float which is about a meter away from it then swims of so I real in And throw to where it was heading after nothing I start reeling in and out of no where the pike bolts at the float it couldn't of been after the fish because from float to fish it's about 4 foot away? It's got teeth marks all over my float haha amazing it scared the life out of me anyone had that before?

Ive had a pike attack my spod as I was bringing it back. The funny thing was the bailiff was stood with me and I had asked him not 10 minutes before if there were any Pike in the venue and he had said no. His face was a picture...

tomthepiker wrote:Ha it was pretty funny Iv put some brown tape try hide the red colour it didn't pierce it but there is nice war wound on it

a pike surfaced right beside my float last weekend, made wonder what was up with my bait? maybe the kinked wire trace and covered in trebles??

It happens fairly regular whilst trolling floats, sometimes over 100ft of water in the depths of winter. Always makes me jump too 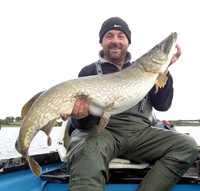 Yep, I guess it's not uncommon, JB & I were fishing a local drain a couple of weeks back when he had one that smashed into his float.

He hadn't realised that was what happened until he struck thinking that a fish was on only to retrieve the bait as if nothing had happened. He re-cast and the float sank immediately, reeled in to find it completely trashed. He was using a plastic tube style slider which he now keeps as a talking point, it is completely cracked down one side and has an impressive set of teeth puncture marks.

No happy ending though, the only run he had that morning came off. The language was more colourful than his changed float.