Its been a while !

Its been a while !

Hi guys, its been a while since I was last here!
Think the draw of the carp was to blame but this year due to some serious flooding on some of the day tickets I fish and looking over some photos of Pike on facebook the draw was too much to handle! lol

So last week I dug my pike gear out from under the dust covers and got ready for my first session in 2 years.
I'd decided on a roving approach so lightened my load as much as possible including treating myself to a new lighter chair.
On arrival I found quite a few pegs flooded so opted for my second choice and set up.
At 10.30 after a few casts to different areas of the swim I had my first run which resulted in a 7.5lb Pike. I was well happy after such a break from the pike fishing.

After another half hour I moved swims and within 20 minutes had a small jack of around 4lb, but was later gutted when I lost a bigger fish half way in after fishing on the far bank.

I moved again at 1.30pm and no sooner had I sat down after connecting up the fox indicators than I had another on! Weighed in at 9lb. This was turning out to be quite an event for me!
About an hour later I had a knock on the right hand rod but nothing further.

It was now 3pm and I decided to double back on myself and fish some other spots, where I bumped into our bailiff doing his rounds who stopped and had a good natter with me. Within 15 minutes the left hand rod was away and I knew it was the best fish of the day and was over the moon when it weighed in to 14lb 4oz. A new PB. 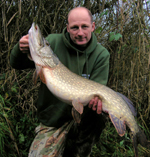 Nice one Gordon. Hopefully getting my membership end of this month so i may well see you on there soon!

HDAA have got some great pike waters Rob.
Hopefully I'm going to try them all! Lol

nice one but i'd check your scales m8. that looks bigger than 14lb to me

rozzo wrote:nice one but i'd check your scales m8. that looks bigger than 14lb to me

Looks about right to me Rozzo

nice cannot beat a pb and first trip out it must be in the stars for you ?