Reintroduction of an old face

Reintroduction of an old face

The old faces that know me have probably wondered where I disappeared to.

Unfortunately cancer picked on me but I put up a fight and won. It wasn't an easy journey though.

At the back end of 2015, I was getting aches in my right hand collar bone and my shoulder was drooping. It felt as if I had slept "funny" on it. I put up with it for a few weeks and then decided to go to the docs. I was given painkillers and booked in for an x-ray. These proved inconclusive. As I have mild rheumatism in my hands I was then given a blood test to see if it was spreading. By now we were into mid January 2016 and I had got worse, pains in my back in the thoracic region, a lump had appeared on my collar bone, and I was getting odd feelings in my liver region. The doctors got in touch saying the blood test had an anomaly and they wanted to repeat it so could I go back? The appointment they gave me was a week away so obviously it can't have been that bad surely.

Before the week was up I was in excruciating pain and went back to the docs as I couldn't bear it anymore. Even work was telling me I shouldn't be there and to take some time off until I was feeling better. The doc was concerned as the pain was that bad, I was crying when she was examining me. I was sent to hospital where they decided I needed to stay in for tests so see what was wrong with me.

Blood tests, examinations, CT and MRI scans followed and on the 25th January (our lasses birthday of all days) 2 nurses came to my bed and told me and my missus that I was not to move at all, I'm on complete bed rest because my spine was at the point of collapsing as one of my vertebrates had shattered.

I asked how that was possible and thats when they told me cancer had struck. I had lymphoma which had spread to my liver, collar bone, lower spine and my upper spine. The tumour that was growing in my T9 vertebrate (thoracic region, just below shoulder blades) had shattered the vertebrate open, hence the great deal of pain I was in. I (very carefully) got carted off to Sheffield Northern General Hospital where I had an operation to remove the tumour and repair my spine. I was in there for 15 days before being allowed home to start chemotherapy for 4 months and then 3 weeks of radiotherapy.

I've had 3 follow up sessions at Oncology and each time told I'm still clear of cancer.

The back is still giving me grief but at least it is slowly improving. I've returned to see the surgeon 3 times since the surgery and it was thought I may have to have a follow up operation but I was told at my last visit it shouldn't be needed now as improvements have been made and physiotherapy should help my recovery. I'm just waiting to hear about that now.

I'm back at work, but on light duties and every day I have to take painkillers due to the constant never ending pain and discomfort but the amount I have to take to get through the day is slowly reducing. I experience mild numbness and pins and needles in my left fingertips and have difficulty sleeping. Other than that I'm all good.

I have really missed the fishing and can't wait to get back at it but am very apprehensive due to my back so keep putting it off. I really do need to kick my own butt and get out there to give it a go.

So as you can see, I'm still around and very grateful of the fact that I've come through it all. It wasn't easy and my fight isn't fully over yet as I still struggle at times with my back. Roll on the good times and hopefully I can get back to pulling a few esox in this coming season.

fantastic news, i hope you continue to get better

I hope you are on the bank soon

glad you are on the mend now mate

Let fishing wait a bit until you are recovered properly

Great to hear that you are both on the mend 👍 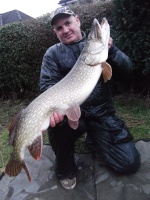 welcome back bud, glad to hear your back

glad you are on the mend now mate

Let fishing wait a bit until you are recovered properly

That's what I keep thinking to myself but the urge is strong in this one, Padawan.

Thanks to everybody for the welcome back and good luck wishes.

welcome back dude. Adie is correct the fishing can wait, the fish will still be there when you are completely ready. In the meantime keep logging on and fill up on your fishing fix via the forum. Winter is coming and this forum will be getting busier and busier now.

sorry to hear about your illness.... only just found your thread .....

, take your time sounds like you need more time off work pal to fully recover , sod that work mate ,they can wait pal

hope to see you soon with a few fish or two , get well soon

Well folks, I'm pleased to announce that I've been out fishing at last.

Note that I said FISHING not CATCHING!

Went to a local pond with my youngest son and he had 2 bream and I had just the one bite.

I went mainly to see if I could sit all day in my fishing chair. It was bearable but isn't the comfiest of things. Good excuse to buy a new one!

I now very rarely need painkillers, I've gained some flexibilty and life in general is much more comfortable than it was. Still have some off days though.

I'm hoping to get out lure fishing before too long to see if that's OK what with all the casting involved.

Fingers crossed and I'll report back when get back on the banks.

Sorry to hear you have been ill but glad to hear you are on the mend. You will be back catching Pike come October.

Since my last visit my health has improved a lot. Not 100% there and the docs say I probably never will get to 100% but I have much more mobility and a lot less pain and discomfort than before.

I've spent a fair few sessions coarse fishing with my youngest son this Spring and Summer and have decided that now is the time to get out and reacquaint (is that spelled correctly?

) myself with good ol' Esox.

It took a lot of restraint to NOT get out there in the cold and try my hand at pike fishing. That might sound weird but as had been said in this thread, I needed to recover as much as possible before doing it. And, as I was told, the pike will still be there when I'm ready to fish for them.

My son asked me a few weeks ago when pike fishing season was and can he give it a go? This was the trigger I needed to get me in the mood for going out and trying my hand again.

So, a second hand carp rod has been bought for him to use, my pike gear has been brought out of hibernation, dusted down and checked over in readiness and new traces made up. Just need a suitable reel for him to use now and we can get out there.

My mate has a lake which is predominantly for carp fishing but has pike in it too. May have to visit that one.

Oh yeah, this may have to wait a couple of weeks as I get married on the 26th of this month.